Finding a new ribbon of singletrack can make you feel like a kid on Christmas morning. Each time I head out of town, I pour over maps and websites trying to find a new trail to run. If you ever find yourself in the neighborhood, take the time to explore these classic trails and check them off your bucket list.

Clinton Reservoir and Clinton Lake are just a few miles southwest of the University of Kansas and the bustling college town of Lawrence. A network of rocky, singletrack trails meander along the north shore of the lake’s limestone rock outcroppings. Link together the Blue and the White Trails for a spectacular 21-mile loop. Keep your eyes peeled for white-tailed deer, wild turkey, waterfowl, bald eagles, and numerous species of songbirds in this carefully managed habitat. The North Shore Trails are home to April’s Free State Trail Runs hosted by Kansas City’s lively trail running community, the Trail Nerds. You won’t be disappointed by this wooded haven tucked just a few miles south of busy Interstate 70. Explore this trail in early October to take in the pinnacle of the Midwest’s colorful fall foliage and perfect running temps.

Kalalau Trail
Where: Kauai, HI
Mileage: 11 miles (22 miles out and back)
Best time to run: May through October

Traversing pali (cliffs) along Kauai’s Na Pali Coast, you’ll encounter breathtaking waterfalls, cliff side panoramas of the Pacific Ocean, and stone wall terraces that give a glimpse into the remains of Hawaiian agriculture. Originating in the late 1800’s, portions of the Kalalau Trail were rebuilt in the 1930’s. The Kalalau Trail is an 11-mile point-to-point foot path that originated as a way to link Hawaiian settlements along the rugged coastline. The trail begins at Ke’e Beach and crosses five lush valleys before terminating at Kalalau Beach. Jump in the ocean for a well-earned swim surrounded by precipitous, fluted cliff faces.

Appalachian Trail
Where: Springer Moun­tain, GA to Mount Katahdin, ME
Distance: Up to 2,179 miles
Best time to run: March through September

A classic choice for the east coast, the Appalachian Trail is an American icon. It’s already on nearly every wanna-be-thru-hiker’s bucket list. Various  access points give trail runners an intimate examination of Appalachia. Choose from endless trail running possibilities along this quintessential route. Start by enjoying the expansive views along any portion of the 101-mile section through Virginia’s Blue Ridge Mountains in Shenandoah National Park. In most places, the ridgeline tower is 3,000 feet above the Shenandoah Valley to the west and the James and Rappahannock River basins to the east. Don’t forget to plan a stop at Big Meadows Lodge for beer and burgers.

Nine Trails
Where: Santa Barbara, CA
Distance: Several options, up to 35 miles (out and back)
Best time to run: All seasons; peak season is May through August

Santa Barbara’s Nine Trails is a 35-mile-long route connecting the nine trails from Jesusita Trail all the way to Romero Trail. However, with loops and cutbacks throughout, you can mix and match the area’s nine routes to customize your distance of choice. There is an abundance of switchback climbs as you ascend amongst the peaks and bomb technical descents into the valleys of the Los Padres National Forest. Be sure to carry water, as many parts of the route are hot and dry with very little shade. You’ll earn your views of the Pacific Ocean but with names like Inspiration Point, you won’t be disappointed.

Running the famous Rim to Rim trail is the ultimate way to get a one-day tour of the heady heights and enormous sedimentary rock formations that make up the Grand Canyon. Poised on the south rim at 7,200 feet, there are two options: the South Kaibab trailhead is the most popular launch point. The short, steep more technical South Kaibab trail, and the 2-mile longer, more gradual Bright Angel trail. Both trails converge at Phantom Ranch Cantina on the Colorado River – your first opportunity for water, food, and even beer, if you’re daring. From the suspension bridge crossing, the North Kaibab trail runs the remainder of the way up to north rim at 8,000 feet. For the Rim to Rim to Rim, turn around and retrace your steps. Due to the altitude, exposed technical terrain and lack of water, make sure you top off water at every available source along the route. The Canyon demands respect, but with planning and a good base of fitness, the route can be accomplished in a day, avoiding the need for a pesky permit. 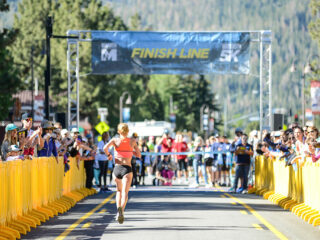