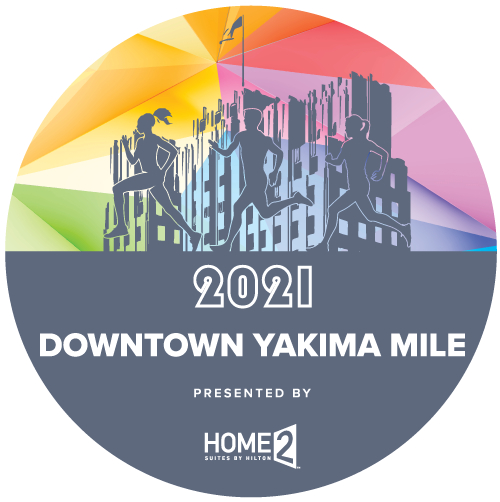 The Downtown Yakima Mile presented by Home2 Suites by Hilton – Yakima Airport is a one-mile race down a beautiful 14-block gradual downhill stretch of Yakima Avenue, finishing in the shadows of the historic Larson Building. Open to runners of all ages and abilities who “want to run their fastest mile…..EVER”.

Run for fun. Run for health. Run for the record. Run to show your community spirit. Run to support survivors of domestic abuse.The Downtown Yakima Mile is back in 2021!

The Downtown Yakima Mile is much more than a race. It’s about bringing our community together in fun, fitness, and in support of important causes that serve our friends and neighbors right here in the Yakima Valley.

Everyone has their own reason to run, particularly this year as we emerge from the COVID-19 pandemic. Yakima’s only downtown community fitness event challenges both individuals and our community to come together on a day where everybody wins and records may fall: This year the Downtown Yakima Mile supports YWCA Yakima, whose motto is “eliminating racism; empowering women.”

The first Downtown Yakima Mile in 2019 drew runners of all ages and abilities from across the valley as they raced against the clock in hopes of setting a new personal best. In the final two races of the day, elite runners from around the world competed for more than $25,000 in prize money. That day, Amos Bartelsmeyer, running for Germany, set a new Washington state record for the mile at 3 minutes, 51.79 seconds! Therese Haiss of San Diego, who had just run the fastest mile for the state of California, won the elite women’s race in 4:29. She missed the state women’s record by a mere 2 seconds.

This year, the Downtown Yakima Mile Committee is ready and set for the second annual event, to be held August 28. The goal remains the same — to provide a healthy community event open to everyone, highlighting and celebrating the Yakima Valley on a local, regional, and national scale. Our hope is that the Downtown Yakima Mile inspires families who live here to become and stay active.

Like most non-profit organizations during the COVID-19 pandemic, the need for services from the YWCA Yakima greatly increased (by more than 30% last year!) but financial support has not. In 2020 alone, the YWCA Yakima touched 13,000 people here in the valley. The 24-hour domestic violence emergency shelter provided 8,000+ bed nights, and the crisis hotline averaged 25 phone calls a day.

The Downtown Yakima Mile, seeks to shed light on the invaluable services that the YWCA Yakima provides in hopes that the community will also join in the effort to end domestic violence in our community by participating in the event. We invite you to join us!