What is a craving? Mostly, a craving is a desire to consume a specific flavor, texture, or food. But where does this intense desire come from? Often, a need or want to consume something specific is influenced by external factors, such as the sight and smell of food. Freshly baked bread anyone?

However, cravings can also be derived from a biological basis. Enter the physiology of cravings. At times, an intense desire to eat something can be the body’s way of telling you what it needs. What? That can’t be right. When you refill your ice cream bowl for the third time, that can’t be a signal from your body, right? Or is it?

As with everything relating to physiology, it’s not that simple. Answers are rarely black and white. Cravings can stem from a basic need for a certain nutrient, but they can also be influenced by hedonistic or social factors. The challenge is to find out where the craving is coming from.

Case in point. What do you think would happen if you let young children loose in a kitchen and told them they could eat whatever they wanted? Total chaos, right? You’d expect them to go for the treats they don’t get to have on a regular basis. However, the work of Clara Davis many years ago demonstrated that young children, given the opportunity, might know instinctively what to eat.  Although an observational study many years ago, the children chose foods that met their nutrient needs. For example, a child deficient in a particular nutrient chose foods high in that nutrient. Pretty incredible what our bodies will tell us, if we listen.

So how does this relate to fueling? Well, sometimes those weird cravings you get during training or racing might be stemming from a biological need. Have you ever eaten something right after a workout or during a run that seems, well, odd? Yeah, that might be your body trying to tell you something. And it might be a good idea to oblige.

In a race not so long ago, I was faced with this situation. My stomach was in shambles, my race was shot, and I didn’t know how I was going to finish. None of my usual race fuel sounded good. In fact, I didn’t think I could stomach any of it. Lucky for me, my race was in Europe and the aid station fare was far from traditional. Think charcuterie and cheese plate. When contemplating the spread and my imminent doom (or DNF) if I chose not to fuel, I realized that the cheese actually sounded good. So did the pasta and meat sauce…minus the pasta. Normally I wouldn’t stray that far from my normal fueling plan (never try something new on race day), but the cheese and meat actually sounded good, which never happens while racing. So I decided to go for it. About three bowls of meat sauce later I was coming back to life. Suddenly I was happy and smiling again and found the energy to head back into the mountains. I stuffed my pack with cheese slices and took off down the trail, with a little more bounce in my step. When I tell people that story I enjoy watching their reaction. It’s usually a cringe “Gross. That sounds terrible!” Yes, normally I would not eat meat and cheese during a race, but I think it’s what my body needed at that moment. I shudder to think what would have happened if I didn’t listen to that craving. I might still be trying to make my way around the mountain…

Listening to the body’s cravings is not an easy concept in application. It takes practice and patience to tune inward and really separate out the difference between need and want. The best way to learn is by trying. My advice? If something sounds good, eat it. Especially during a race. Usually, you won’t regret it. Of course, it’s important to practice consuming different foods during training so you have an idea of what you can and can’t stomach while running. But, as I said earlier, I had never tried the charcuterie plate, and it ended up saving my race. During high intensity exercise (like a race), appetite is suppressed, so cravings are not coming from external influences. Most likely it’s the body telling you what it needs. So if those aid station potato chips or ham wrapped pickles sound good, go for it. Your body might be trying to tell you something.

Stephanie Howe, Ph.D., is a nordic skier turned trail runner, and enjoys racing distances from 50K up to 100 miles. Stephanie splits her time between racing as an elite runner on The North Face team, and working as a coach and sports nutritionist. She recently completed a doctoral program in Nutrition & Exercise Physiology at Oregon State University. 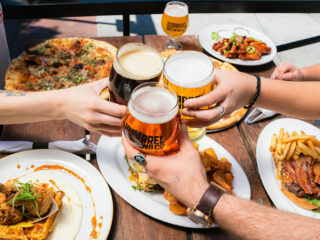 Is Your Diet Promoting Fatigue?

Nutrition and Immunity: How To Stay Healthy